Might lump all this in the one uber thread?

Looks like the FAI are sticking with the same calendar and ignoring my suggestion to play the EA Sports Cup in the first half of the season with the final on the June bank holiday and the FAI Cup in the second with the final on the October bank holiday. We'll be having the same chats about attendances when 1800 turn up on a Monday to see us play our 8th game in April against UCD...

The 2019 SSE Airtricity League season will begin on Friday, February 15 and it will end with the Irish Daily Mail FAI Cup Final on Sunday, November 3.

The first game of the new campaign will actually be the President’s Cup between Dundalk and Cork City, which will be played on either Saturday, February 9 or Sunday, February 10.

Dundalk will then begin the defence of their SSE Airtricity League Premier Division title on the next weekend, while the First Division will kick off a week later on Friday, February 22.

Another key date for the calendar is the EA SPORTS Cup Final, which will be played on Saturday, September 14.

The mid-season break will take place from Saturday, June 15 through to Thursday, June 27.

The official Fixture List for the 2019 season will be released on Wednesday, December 19.

Of course first thing that happened on twitter was a fan complaining about the price going up...
Top

Of course first thing that happened on twitter was a fan complaining about the price going up...

Good stuff, great to have them available well before Christmas. It'd possibly have been better to present it as a 10% discount before 1 Feb, rather than a 10% increase after 1 Feb, but good value for money anyway.
Top

Club on the lookout for new sponsors as Fyffes have announced they’re not renewing (that’s the tl;dr of a load of corporate waffle).

Time for Mal to earn his crust
Top

Fair few body blows since the Cup Final. Thank Christ the new owners had the foresight to nail down all the players.
Top

Ah sure John Gill is on his way to rescue us. Pressure is for tyres... God fcuking help us!!
Dundalk Fc. First Irish club to win points in group stages of a major European Competition.
Top

“ I get knocked down , I get up again , your never gonna keep me down”.
Top

The two most successful sides of the last decade meeting on opening night. Sounds good to me!
Top

Away to Sligo, UCD, Waterford, Bohs and Cork in the final round. At least the final game is at home - to Pats.
Top 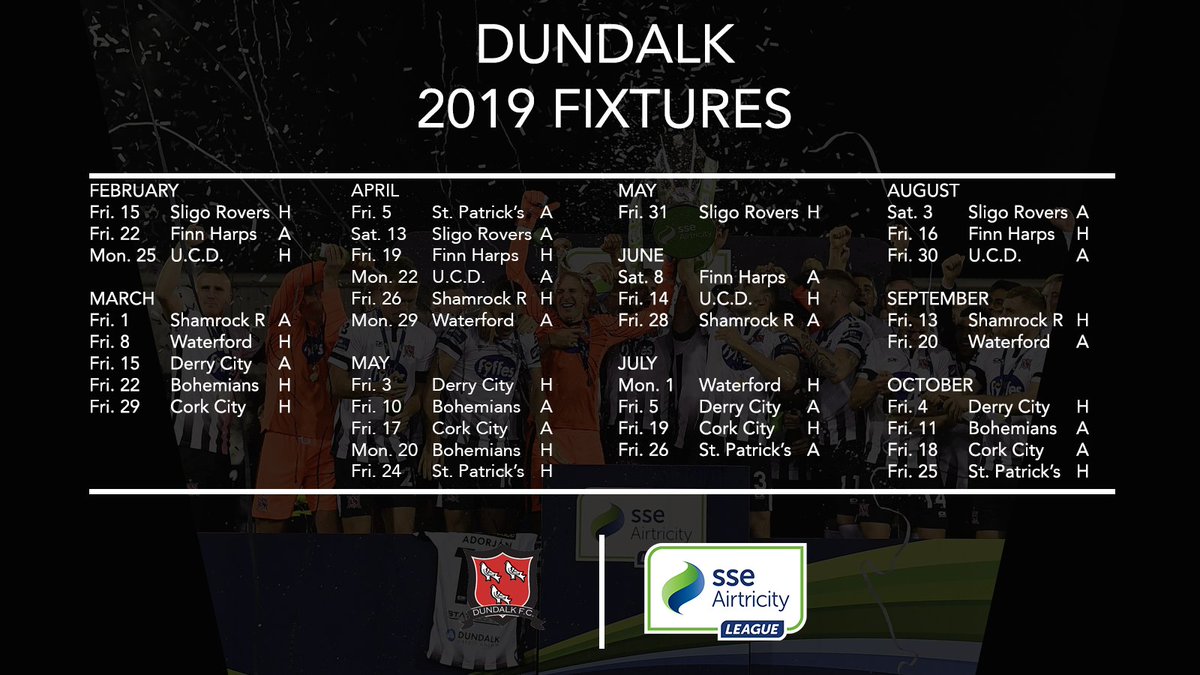 El Paso wrote:20 of the 36 matches will be played by the end of May.

It is ridiculous, but arguably it plays into our hands. Let everyone play a shit load of games before the summer break- we should have the squad and ability to cope better than most. Then things should be easier to manage after the summer break when we've Europe to deal with.
Top

March will test us and our new "manager" out!
Drogs are scum!
Top

With pre-season due to start (officially) in two weeks, and the President's Cup on the weekend of the 9/10th, it looks like we could be back in OP for friendlies before the end of January. Happy Days.
Top
Post Reply
212 posts