Hoping to get another look at Taner Dogan and Cammy Smith along with the new signings.

VP may also give the 3 at the back another spin

Ezeikial posts personal opinions and observations from this supporters perspective.

Gary Rogers is “looking forward” to getting back onto the Oriel Park pitch when Dundalk FC takes on Drogheda United in the annual Jim Malone Cup match on Thursday night, insisting that the game will most certainly have a “competitive” feel to it.

After winning their first pre-season friendly 7-1 against UCD, The Lilywhites put in spirited performances against CFR Cluj and CSKA Moscow in Spain last week, losing both matches, 2-1 and 2-0 respectively, with the Dundalk shot-stopper drawing plenty of positives from the squad’s trip to the Mediterranean.

“It’s been a really good trip, really good to go out and play against the calibre of opposition that we have and compete really well in both games,” he told The Democrat.

“We probably could have scored (against CSKA); we had a couple of good opportunities. Obviously, we scored against Cluj and were in the lead for most of the game and just petered out in the end, but I think we can take a lot from both performances. We really competed very well and there are a lot of positives to take out of both games.”

Dundalk conceded two goals inside the first 12 minutes against CSKA in Oviedo on Friday, but made a good account of themselves after that against what are seasoned European campaigners, who have, impressively, qualified for the Champions League group stages in six of the last seven seasons.

The player that scored both goals against Dundalk was Arnor Sigurdsson, who, significantly, got the third in CSKA’s memorable 3-0 win over Real Madrid at the Santiago Bernabeu just over a year ago.

On Friday, the Icelandic international was denied a hat-trick from the penalty spot by Rogers, who saved superbly after defender Seán Hoare was adjudged to have fouled David Karaev in the box.

“It’s nice to make a couple of saves in a game. Obviously, penalties can go either way – it’s nice to save an odd one, but I think it’s just about getting yourself back in the swing of things and to be competing and playing against that sort of opposition at that intensity, it’s really good preparation for the league.”

Having flown back to Ireland on Sunday, Vinny Perth’s men continue their preparations for the new season with the Malone Cup match, while friendlies against Irish League side Crusaders and Longford Town – both within 24 hours of each other – have also been pencilled in.

Dundalk have been the victors in each of the last four editions of the pre-season competition, the most recent of which was a comprehensive 5-1 win over their County Louth neighbours 12 months ago.

“I think everyone, when it comes to playing Drogheda in the Jim Malone Cup every year, you’re going out obviously to win the game like you are in every other game,” continued Rogers.

“I know it’s deemed as a friendly, but it’s a good competitive match in pre-season and it really helps get us ready for the start of the season, so it’ll be one we’ll be looking forward to when we get home.

“We’ve played two games this week and we won’t play until Thursday, so it’s a great opportunity to get back on the pitch.”

Club not exactly going overboard promoting this. Day before game and no mention on site or twitter about the game or ticket prices etc.
Top

punkha wrote: ↑
Wed Jan 29, 2020 11:33 am
Club not exactly going overboard promoting this. Day before game and no mention on site or twitter about the game or ticket prices etc.

I was just thinking the same myself, fiver a head would be plenty into this tbh.
Top

punkha wrote: ↑
Wed Jan 29, 2020 11:33 am
Club not exactly going overboard promoting this. Day before game and no mention on site or twitter about the game or ticket prices etc.

Has Gavin started yet?

Hopefully these marketing aspects will be part of Gavin McLaughlins brief in addition to content creation.

There has been a lot of change off the pitch during the close season, all for the better for the future of the club in my opinion. And I’m hoping we’ll see the benefit soon.

But I can’t help feeling that the folk who come on here to defend Peak6 no matter what - saying that jerseys don’t matter, ground improvements don’t matter, sponsorship doesn’t matter, aren’t that far away from saying fans through the turnstiles don’t matter.

The gamble on getting European money really seems to have allowed everything else become insignificant.
Top 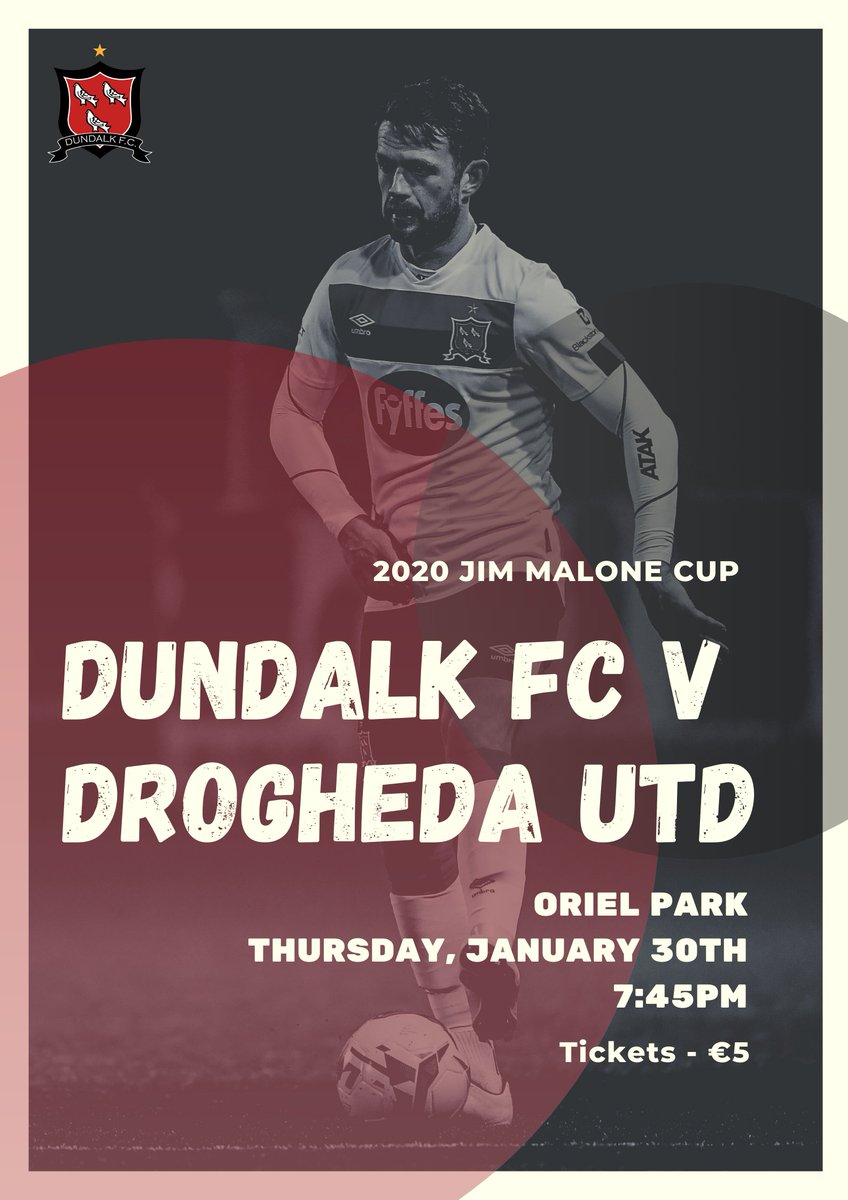 Credit where it is due €5 a head is very reasonable, hopefully get a decent crowd out.
Top

That’s on the official Twitter. There’s Gavin at work I think!
Top

Agree completely - the ticket price is spot on.

An earlier posted alluded to a lack of promotion - it's one thing having an attractive price, but the price will not attract many irregulars unless it is promoted
Ezeikial posts personal opinions and observations from this supporters perspective.
Top

Black is the colour


James Rogers
@jamesdundalk
Dundalk are expected to don their new black away strip for the first time against Drogheda Utd in the Malone Cup tomorrow night. Despite leaks pre-Christmas, the new kit has yet to be officially unveiled.


James Rogers
@jamesdundalk
Dundalk are expected to don their new black away strip for the first time against Drogheda Utd in the Malone Cup tomorrow night. Despite leaks pre-Christmas, the new kit has yet to be officially unveiled.

I really hope it's not the one that was leaked - it looked awful.....
Top

The away jersey has actually grown on me.

I think its not so bad, If the Fyffes logo didnt have the horrible blue print around it I think it would look far better
Top
Post Reply
28 posts